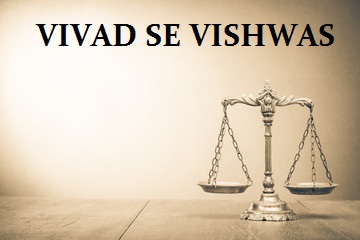 Posted by Vaishali Goyal
In: Announcements
On 18 Apr 2020

Overview : Vivad se Vishwas scheme has been introduced to reduce the number of litigations going on between Income Tax Department and Tax Payers. It is going to benefit all those taxpayers, who are willing to pay tax but are unwilling to pay interest and penalty.

Vivad se Vishwas scheme was announced by the Finance Minister in the Budget 2020 to settle tax disputes between taxpayers and the Income Tax Department. The scheme provides the waiver/reduced rate of interest and penalty to taxpayers with the full and final settlement.

Under this scheme, the cases related to direct tax, in which the taxpayer’s lawsuit is pending in any forum, will be resolved.

Eligibility for the Scheme:-

Where no appeals is pending but the case pending in arbitration, such cases are also eligible for the scheme. Disputed tax on the disputed income for which arbitration has been filed.

The scheme is not applicable to pending disputes before AAR (Authority for advance Ruling), in case the writ has been filed against the order of AAR, such case are covered.

The excess amount in comparison to the amount payable under the scheme will be refundable.

In case writ has been filed to challenge the validity of notice, such case are not covered as quantification of demand is not possible.

In case of any further clarification is needed, feel free to connect with us.