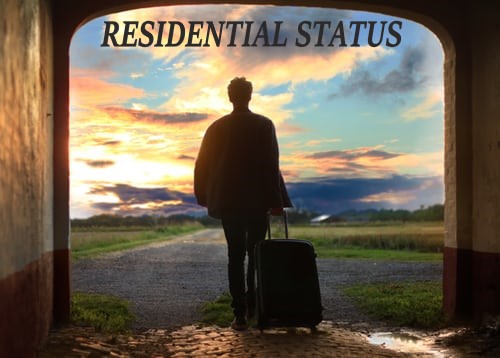 Meaning and importance of residential status.

A large number of Indians work outside India or have businesses outside India. They visit India, time to time for a limited period, or after a stint in abroad, in relation to India. Tax Liability in India in such cases depends on whether a person is a resident or a non-resident. So it is really important for every person to check its residential status before filing Income Tax Return. If an individual is not a resident in India, only then his income that is earned in India or which is received in India is taxable in India but the income earned in the foreign will not come in the context to tax provisions of India. So, to avoid world income becoming taxable in India, one must be careful about the period of stay in India.

How to determine residental status ?

The total income of each person under the provisions of the Income Tax Act, 1961 is based on his / her residential status. Section 6 of the Act divides assessable persons into three categories

b. A resident not ordinarily resident (RNOR)

Taxation differs for each of the above categories of taxpayers. Before we get into tax, let us first understand how a taxpayer becomes a Resident, an RNOR or NR.

An individual becomes a resident in India if he satisfies any one of the following conditions:

If a person is a citizen of India, who leaves India for employment or business in a foreign country during a financial year, he will be qualified as a resident of India, if he stays in India for 182 days or more. Such persons are allowed more than 60 days and less than 182 days to stay in India. However, from FY 2020-21, the period reduces to 120 days or more, the total income of such a person (other than foreign sources) is more than Rs 15 lac.

If a Individual qualifies as a resident, the next step is to determine whether he / she is a resident (ROR) or RNOR. If he satisfies both of the following conditions, he will be a ROR.

1. Has been a resident of India in at least 2 out of 10 years immediately previous years, and

2. Has stayed in India for at least 730 days in 7 immediately preceding years.

NOTE :-  It has similar provisions for HUF.

If  any 1 of the above condition is not satisfied, the person is said to be resident but not ordinarily resident in India (RNOR).

None of the conditions stated above (A) and (B) for the year are satisfactory.

Non Resident : His tax liability in India is limited to the income earned by him in India. They are not required to pay any tax in India on their foreign income.

In case, there is any other qurery related to residential status , connect with us